I want to share the story of my diagnoses and also document my pregnancy journey with Uterus Didelphys. The main reason i am sharing my journey is because when i was diagnosed with UD, i was trying to research as much information as i possibly could… with not much luck. So even if my journey can help 1 other woman going through pregnancy with UD, I can sleep easy at night!

Being diagnosed with Uterus Didelphys.

I have always suffered with really horrendous period pain, to the point that every month i would have at least 2-3 days off school. I would be doubled over in pain and i would always be sick from the pain in my younger years.

During my young teens i was referred for an Ultrasound scan to rule out any cysts and to investigate the possibility of endometriosis. I cant remember exactly how old i was, but from the scan i was told what i ‘most likely’ had was a Bicornuate Uterus. However, there was still no explanation for the pain i was going through.

By this point i was controlling my pain with contraception, initially the mini pill – until it was discovered i have a blood clotting disorder callled Factor V Leiden which basically increases your risk of developing a blood clot, so my contraception was then changed to the Depo Provera Injection. I was on this from age 18-22.

After coming off of the Depo Injection to start ‘trying’ for a baby, the horrendous period pain returned. It was getting to the point where in the week leading up to my period i would be so down, feeling anxious and upset at knowing how much pain i was going to be in. So i decided to return to the doctors as i still had no answers. I had moved GPs and was lucky enough to find a GP that really understood what i was going through and was quick to refer me once again for more investigative scans.

As part of my referral she had to examine me, and it was then that she said ‘did you know you have 2 cervix?’ Which i obviously did not know! It was then that she began to tell me about Uterus Didelphys. It was the first time i had ever heard of it, a double womb. 2 wombs. 2 wombs usually half the size of a normal womb.

She referred me for the Ultrasound scan with specific instructions to investigate the possibility of Uterus Didelphys.

3 days before my scan, i found out i was pregnant! I arrived for the scan and informed the staff that i was around 4 weeks pregnant, it was too eary to see the baby on the scan. But they confirmed i had Uterus Didelphys, 2 seperate wombs and 2 cervix (It is possible to have 2 vaginas with this condition, but i just have the 1!). They also confirmed that the uterus lining was thick in both wombs, a positive sign for the recently discovered pregnancy. I was told at this appointment that it would be unkown how the UD would affect my pregnancy and it would just be a waiting game to discover the viability of the baby.

My first midwife appointment was at 6 weeks, due to the recent diagnoses of Uterus Didelphys and also the Factor V Leiden blood clotting disorder i was informed i would be Consultant lead throughout my pregnancy; I have to say i was relieved as the midwives i saw did not know anything about Uterus Didelphys and could not answer any questions i had regarding it, but i was reassured that my consultant would be able to answer all my questions at my 12 week scan.

Due to a small bleed at 7 weeks, we booked in to have a private scan, i still had no sickness and my only symptom at this stage was tiredness, so I felt i needed a bit of reassurance and we both just wanted to see our little baby.

It was probably the most nerve wrecking experience of my life, laying down on the bed and waiting for the lovely midwife to tell us the news.

She turned the screen round and said ‘there’s your baby!’

A little 8 week fetus, shaped like a little peanut with it’s heart beating away. Settled comfortably in my left womb. By far the best thing i have ever seen.

The lady we had the scan with was absolutely amazing, she was a trained midwife and knew so much about UD, but said over her career of 20 something years, she had only ever scanned 5 women with the condition! She showed us on the scan where my left uterus ended and where my right uterus started…. as she moved over to the right uterus she said the lining was also thick inside that womb. She found a pregnancy sac in the right womb but no visible baby.

Due to the UD, it would be completely possible to conceive 2 baby’s, 1 in each womb, with completely different conception dates.

She explained the pregnancy sac in the right womb could be a second baby with a later conception date, so it might just be too early to see this baby on the scan… or it may be the beginning of the ‘breaking down’ of the pregnancy in the right womb. We were booked in 2 weeks later to confirm if there was 1 or 2 baby’s in there.

It was a bizzare feeling to come away with, we were obviously completely over the moon to see our beautiful healthy baby growing away in the left womb. But for those 2 weeks there was a constant niggle in my head about the baby that was in the right womb. Maybe this explained the small bleed i had at 7 weeks? Maybe that was the beginning of me losing that baby? Maybe the baby is fine and just a week or 2 behind the baby in the left womb?

There was also the scared feeling of how my body would cope if there was a baby in each womb, would there be enough room to carry both babies to a healthy term?

My husband Liam was amazing and understood my thoughts and feelings but helped me focus my energy on the little life that we knew was growing in my left womb.

We went back at 10 weeks pregnant and the midwife confirmed the pregnancy sac in the right womb was breaking down and the baby had sadly not continued to develop.

But we got to see our left womb baby again and the difference in the 2 weeks was astounding, it was no longer a little peanut with a heartbeat, it now looked like a baby! Kicking away and throwing its arms around.

Again, bitter sweet emotions, but the overriding feeling of joy that we had finally made it to this point and our baby was developing as it should be at this early stage and seeing its heart beating is really the best thing in the world. 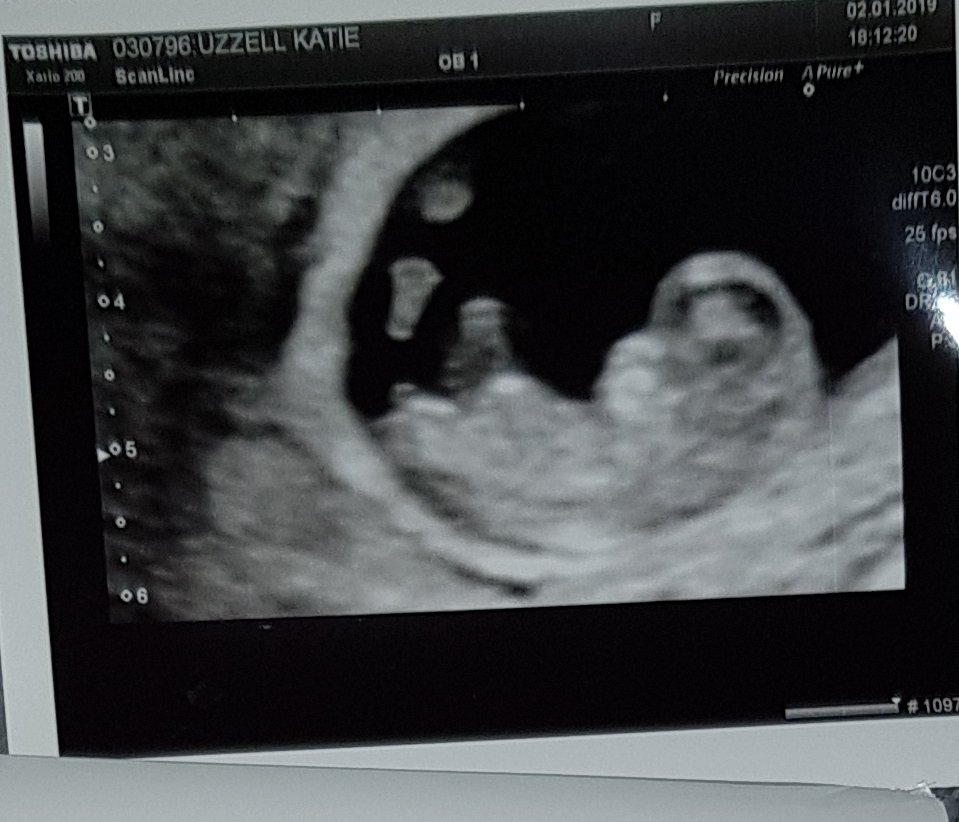 I was ready now to see my consultant at 12 weeks to find out more about how UD could affect my pregnancy.

My next blog will go through weeks 12-20 of pregnancy.

4 thoughts on “My journey with Uterus Didelphys.”